Rice is grown mainly in the Kuninaka Plain, which spreads across the middle of the island, as well as in both mountainous and coastal areas. Nurtured by the moderate climate of Sado, with its clear water and minerally laden sea breezes, Sado rice is renowned as a top, brand-name rice, on par with Uonuma rice. The Toki Brand Rice Certification Initiative has been setting standards in farming since 2008, such as reducing the amount of chemicals by 50%, and implementing farming methods that nurture biodiversity in the paddy fields. Only rice that has passed strict examination and meets the above criteria is recognised by Sado City as the brand: "Toki to Kurasu Sato" (Living in Harmony with Toki)," a brand that can be trusted. 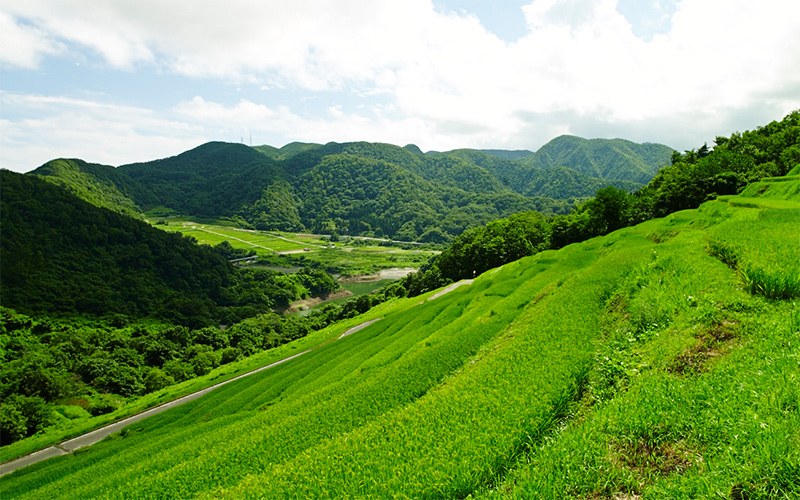 Sado's shiitake mushrooms, slowly grown using timber, are thick and have a distinct fragrance. They are also said to be high-fibre and low-calorie. Dried shiitake mushrooms (hoshi-shiitake) produced in Sado are thick, and the cap is bright in colour. 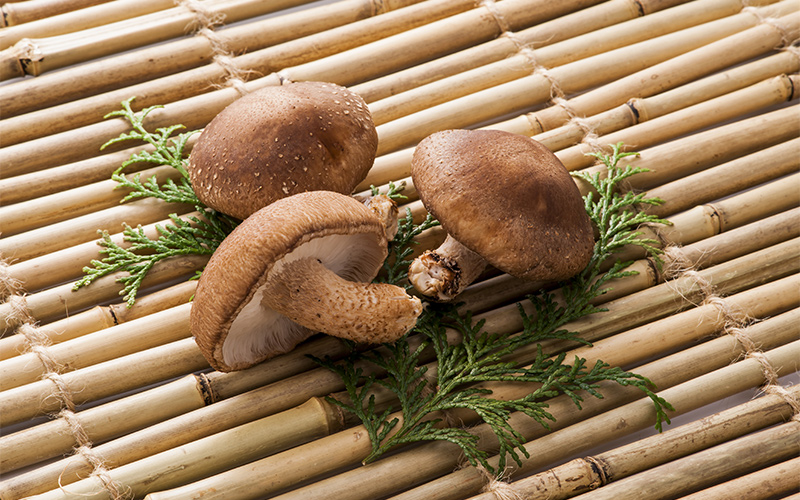 Sado produces two varieties of astringent persimmons (shibugaki), "Hiratanenashi" and "Tonewase," which are shipped under the brand-name of Okesagaki. Sweet and juicy persimmons are one of Sado's specialties. As there are no seeds inside, they are easy to eat. Okesagakis feature a soft, melting texture and are rich in vitamin C. You can enjoy them in many ways, such as sawashigaki (astrigent-removed), hoshigaki (dried), as liquor or wine, and even sorbet, among others.

Le Lectier is a pear variety, also known as Rare Pears, or Lady of Pear. Le Lectier pears are characterised by a pleasing, rich fragrance, and a luxurious sweetness with moderate acidity. They also feature a melting texture and soft flesh. Just one bite and you will love this pear, which is one of the best of its kind.

Originating in France, Violette de Solliès is a black variety of figs which has soft flesh and a high sugar content of 20%. Because it is scarce on the market, it is sometimes called the "rare black diamond".

Other fruits produced in Sado

Sado is also well known for cow-calf production. Many Sado cattle are auctioned off to be reared in famous brand provenances. Cattle reared in Sado are called Sado Beef. Although it is scarce in supermarkets and rarely available, you can usually try some at restaurants or hotels in Sado. 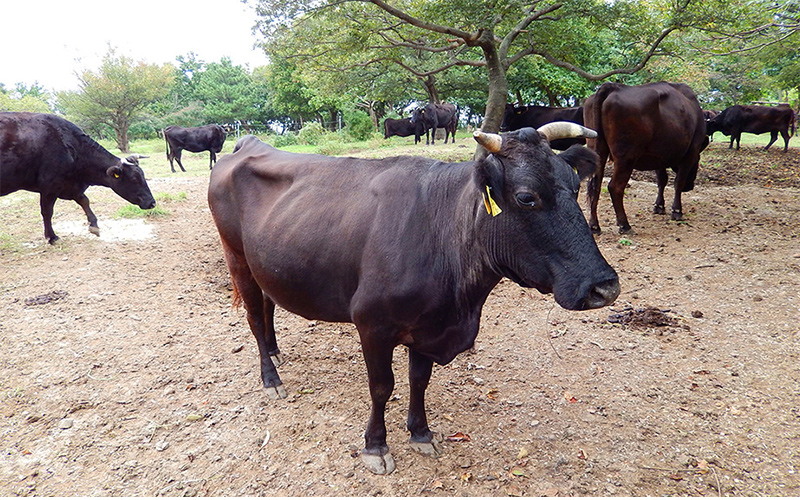 Shrimp caught in the surrounding sea are called sweet shrimp, but in Niigata, they are popular as Nanban-ebi (red pepper shrimp) because their bright red colour and shape resemble hot red peppers. They are characterized by a distinctive mellow texture and sweetness, and make crowd-pleasing sashimi and sushi toppings. 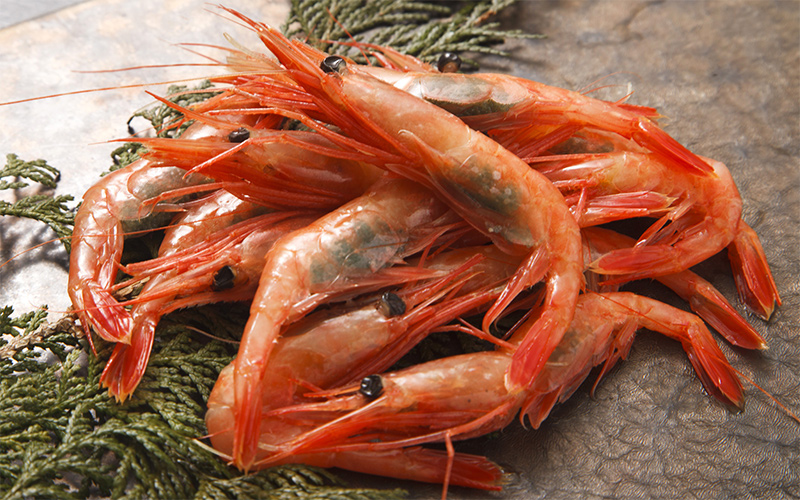 Crabs are a representative ingredient from the Sea of Japan in winter. Red snow crabs, snow crabs and horsehair crabs (kegani) are caught off the coast of Sado. Among them, fresh snow crabs, short-farmed in deep sea water after landed offshore, enjoy popularity because of their firm flesh and enhanced sweetness. 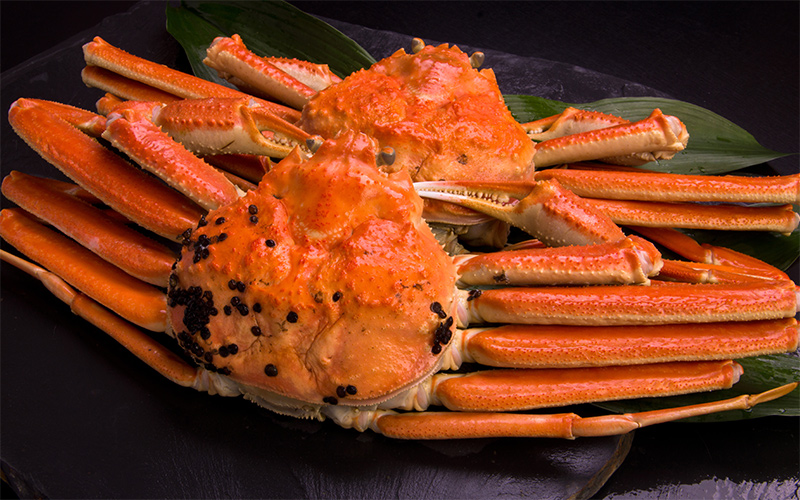 Many varieties of squid, including Pacific flying squid, golden cuttlefish, and spear squid, are caught year-round. In addition to being enjoyed fresh as sashimi, squid dried overnight is also delicious because of its concentrated flavour. 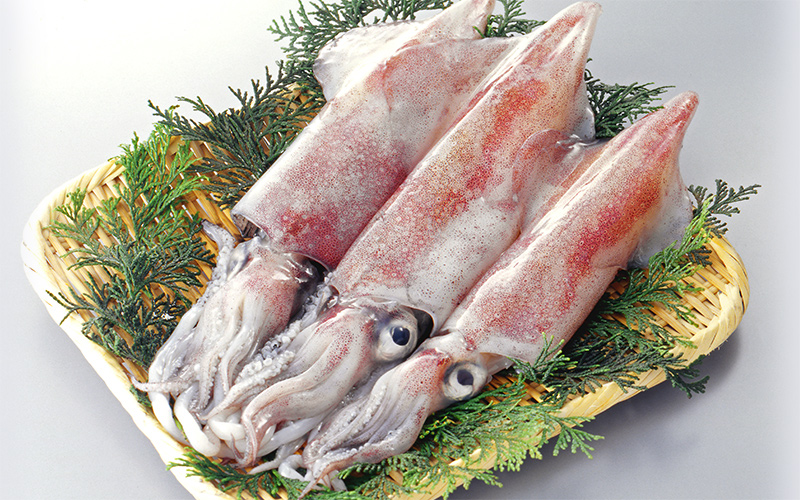 Yellowtail wanders around offshore near Hokkaido in summer, and starts coming down south for spawning when the water temperature goes down. The first to arrive in Sado's waters are caught in fixed nets set in Ryotsu Bay. Connoisseur fishermen carefully select the biggest yellowtail (over 10kg) and prepare them for consumption while still aboard the ship. They are then put on ice made from deep sea water, and shipped out as "Sado Ichibanburi (first yellowtail)". 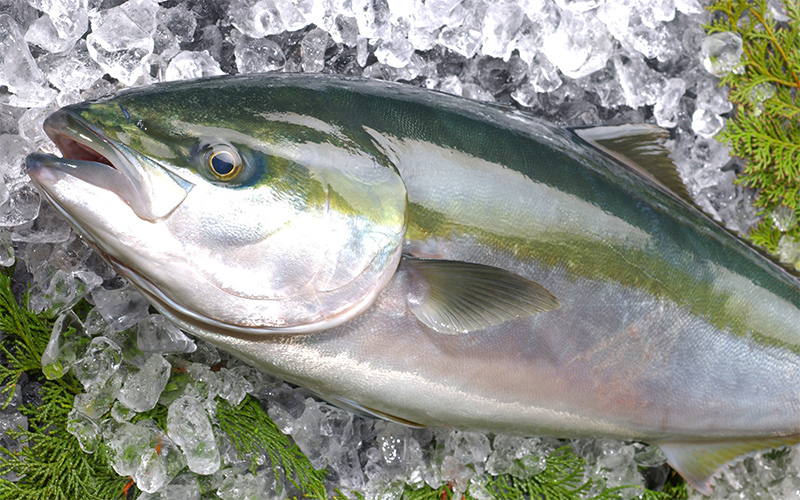 Winter is the season of the Pacific Giant Oyster. Farmed in Mano Bay and Lake Kamo, they are comparatively small in size, but have an established reputation. Enjoy their scrumptiousness in dishes such as oyster hot pot and deep-fried breaded oysters. Iwagaki summer oysters are also exceptional. 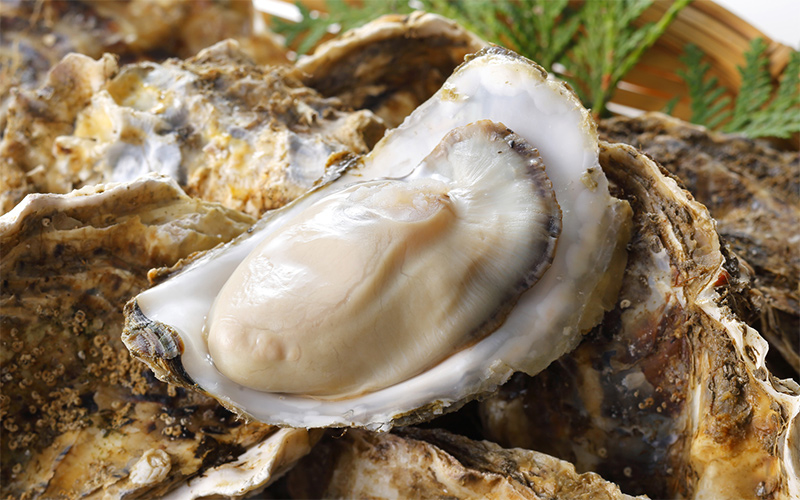 Other seafood produced in Sado

Sado produces an extensive variety of seaweed, including wakame, mozuku and iwanori in spring. Abalones and turban shellfish can be found in summer. Seaweed nurtured among the rough waves of Sado is an especially perfect souvenir.

Sado is home to five sake breweries, each of which brews sake according to its own unique character. Sake brewed with delicious rice nurtured in abundant nature, and the clear waters of Sado, features a dry, clear taste, and a refreshing finish. 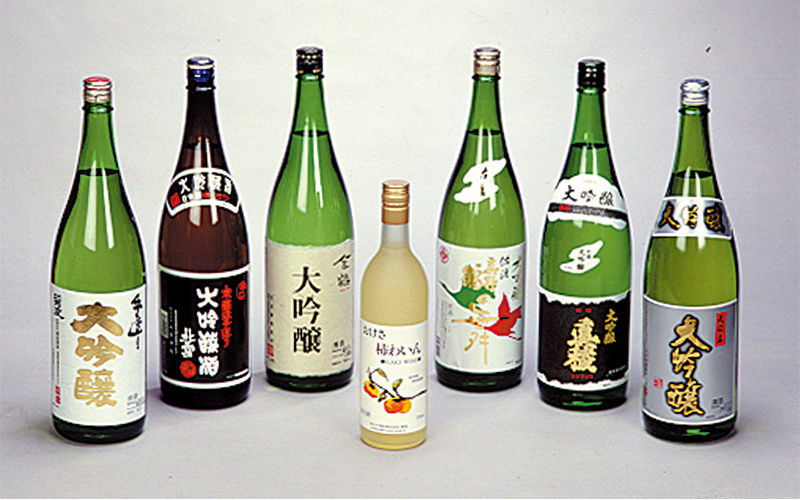 Igoneri is made by boiling down the ego variety of seaweed and then thickening the liquid. The jelly is then cut into thin strips, just like soba (buckwheat) noodles, and served with soy sauce and condiments such as chopped spring onions and wasabi. Igoneri is a classic specialty of Sado, in which you can enjoy the refreshing flavour of the sea. 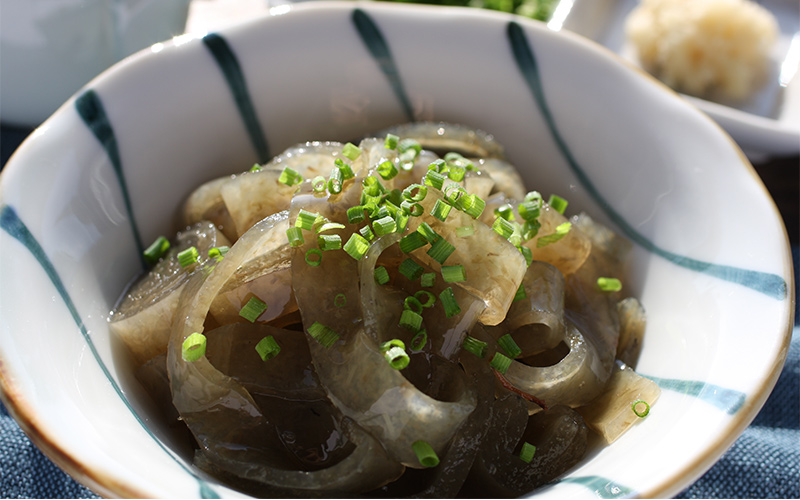 Famous as a quintessentially Sado confectionery, Sawane Dangos are bite-sized dumplings with a smooth, red-bean paste filling. They are made by steaming uruchi-mai (ordinary rice) and have an extremely soft texture. Sawane Dangos have been a beloved delight since the Edo Period, when the gold mine flourished (the 17-19 centuries). 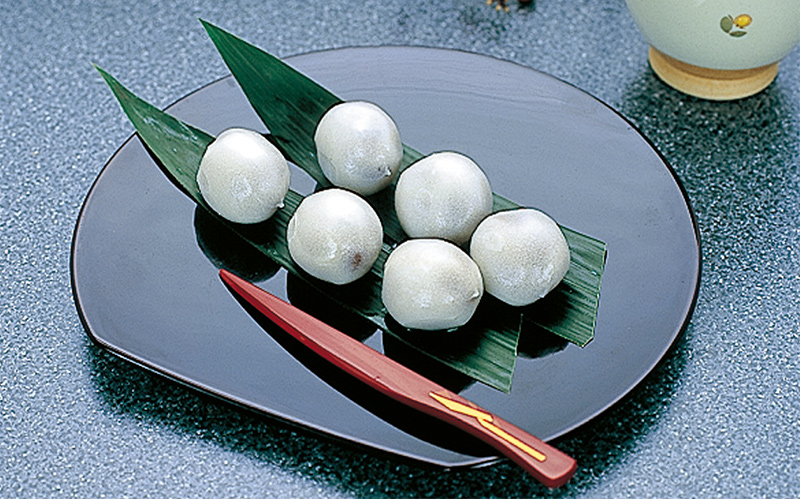 Milk Factory "Il Cuore" is the one and only producer and supplier of natural cheese within Niigata Prefecture. Butter and cheese made from fresh milk, which are produced at a clean milk production farm (a farm in the process of adopting a system to ensure safety), have been attracting people's attention as a new souvenir from Sado. 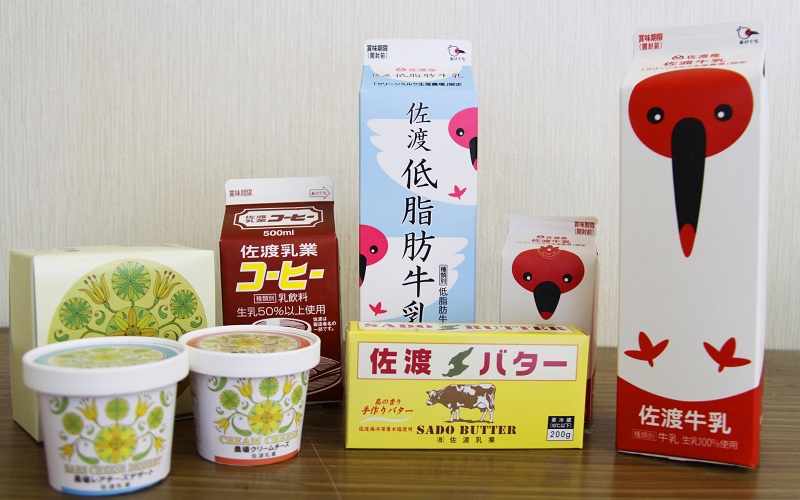 Henjinmokko means "a stubborn person" in the Sado dialect. These sublime salami and sausages, crafted by experts, have won a number of prizes even in Europe, the origin of processed meats. 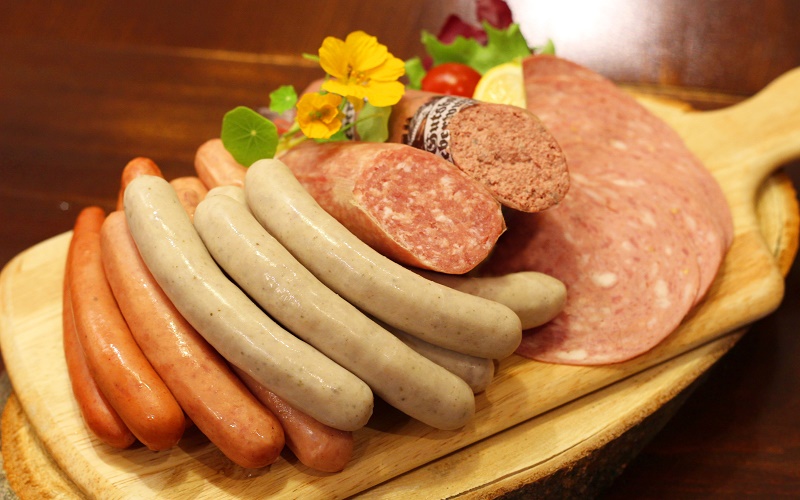 Sado Ten-nen Burikatsu-don is a local dish totally themed on Sado-produced ingredients, ranging from the yellowtail itself, to the rice and rice flour used for the coating, as well as, the sauce. The restaurants which serve this dish are bound by rules, such as putting up a good-catch flag so you can find the place easily. Try this dish chock-full of the taste of Sado. 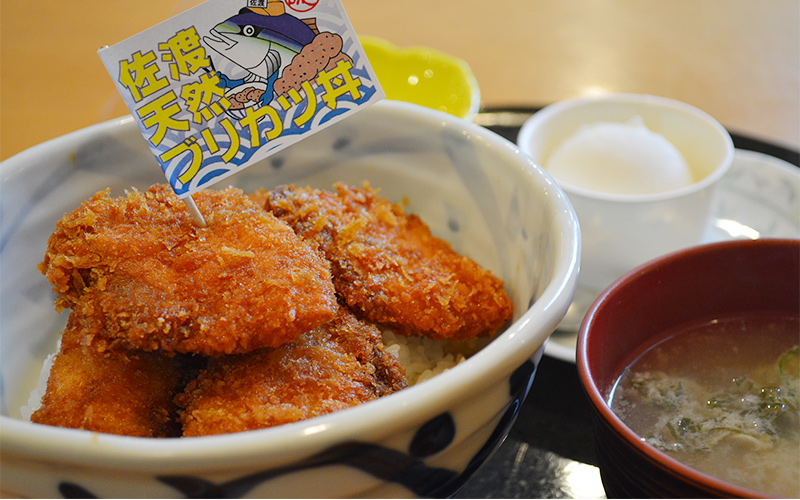 In April 2016, Sado City published a cookbook entitiled Sado Gohan, a traditional local cuisine recipe collection from all parts of Sado. Recipes were collected and reproduced over a period of six years in collaboration with Health Promoters from all corners of the city. Comprising a total of 220 pages, the cookbook introduces 188 recipes, plus it has a basics section which shows readers how to make a broth, cut vegetables, use chopsticks, and so on. A guidebook to festivals in Sado is also included. This book was put together with the hope that traditional recipes would be passed down through generations, as well as with the desire to promote local food and nutrition education. Sado Gohan is available on loan at Sado libraries (in the local history or general cooking sections), as well as for purchase at 1,800 yen (tax included). Please take a look.