The culture of Sado is commonly and broadly divided into three categories: court culture nurtured by court nobles and intellectuals exiled to Sado, samurai warrior culture brought to Sado by commissioners and officials during the development of mines, and townspeople culture introduced by merchants and shipmen via the kitamaebune shipping route. This mix of culture of Sado, therefore, is often described as the culture of Japan in miniature.

Sado is an exceptional place in Japan because Noh theatre is deeply rooted in the daily livelihood of its people. So much so, in fact, that the poet Keigetsu Omachi (1869-1925), upon hearing farmers sing Noh chants while working, wrote a haiku poem, "Bush warblers―a Noh stage in a village of ten households." At its peak, there were over 200 Noh stages on Sado, among which over thirty (one third of all Noh stages in Japan) still remain. Since Zeami (a playwright and performer who developed Noh theatre to perfection) was exiled here, Sado has been deeply connected with Noh theatre since olden times. However, it did not achieve widespread popularity on the island until Nagayasu Okubo, the Deputy for Sado (later the first Commissioner for Sado) and a former Noh actor, brought two other Noh actors with him to Sado from Nara during the Edo Period. Although it was originally a form of art that samurai warriors were expected to learn, Noh theatre soon spread as a performing art dedicated to deities in Sado. Thus, it was transformed into a kind of entertainment which villagers enjoyed watching, as well as performing themselves. Many of the existing Noh stages are situated within the grounds of shrines, which are mutual assets of the villagers, and this indicates the community-based development of Noh theatre in Sado. Noh performances, having been passed down from generation to generation, are held from June to August. You can see Noh performances somewhere every week in June during the season of bonfire Noh performances. In addition, you can join workshops of Noh and shimai (a simplified version of Noh consisting of a dance accompanied by chanting) on Noh theater stages. Click here to see the 2020 Noh performance schedule. 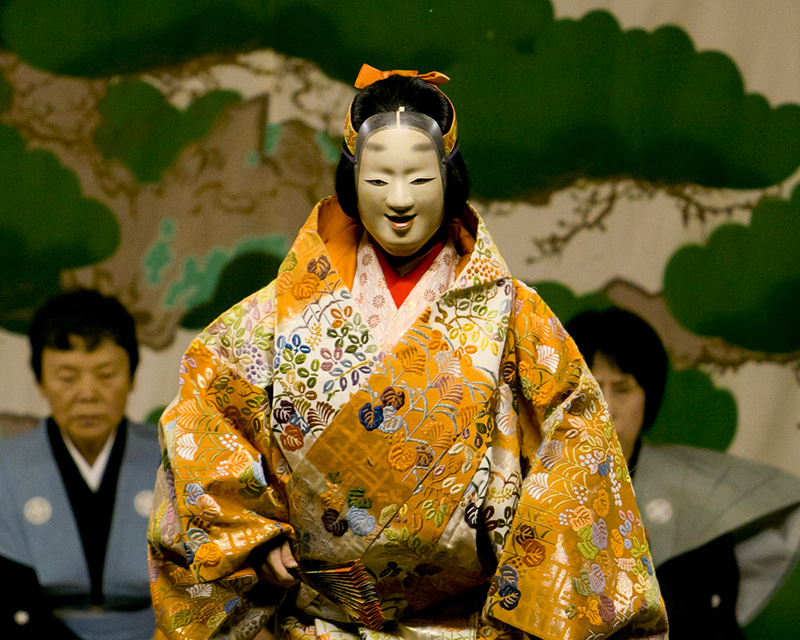 Sado Okesa is derived from the sakamoriuta variety of song (songs for gatherings) called Haiyabushi in Kyushu. The song was first introduced by shipmen to the Ogi area in Sado, where the song began to be sung at parties, and was then used as song accompaniment for dances at Bon festivals (when spirits of the dead return home). It was later sung at the processing plant in the gold mine. Okesa gained in prominence when Bunzo Murata, a member of the folk group "Tatsunamikai" (established in 1924), introduced to the public a song named "Seicho (orthodox) Sado Okesa." The melancholy tune and sophisticated, elegant dance of Okesa make it a folk song and dance representative of Japan. 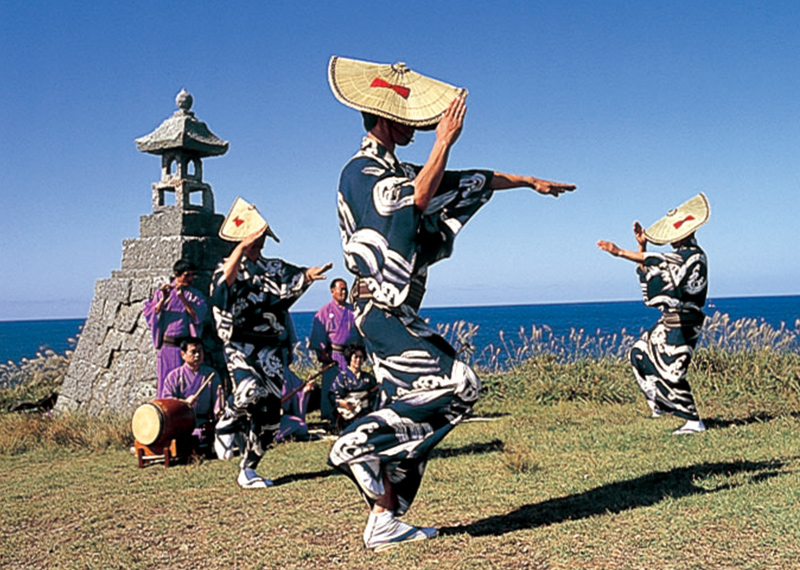 Onidaiko is a quintessentially Sado traditional performing art. It is offered on many occasions, rituals and festivals in Sado, to pray for the year's good harvest or catch, and the well-being of families. Around 120 villages on Sado have their own Onidaiko groups. Onidaiko is roughly divided into five styles: mamemaki (bean throwing) style, issoku (single foot) style, Maehama style, hanagasa (straw hat decorated with flowers) style, and Katagami style. Each village has its own, original arrangement of Onidaiko. Sadokoku Ondeko Dot-com is held every May in the Ryotsu area, showcasing a wide variety of Onidaiko from different areas.

Bean-Throwing Style
An older man, clad in the ancient formal court robes of the samurai, and donning a formal eboshi-style hat, holds a square, wooden measuring cup, and dances to the rhythm of a taiko drum, while swinging the deep sleeves of his robe.

Issoku Style
Issoku Style is an original format from the Edo Period (the 17-19 centuries), that is called "Onidaiko" in Aikawa. People dance to the rhythm of taiko drumming, as if hopping on one foot.

Maehama Style
Two Oni, Shinto Deities dance to the music of a flute and taiko drum. Some villages have the role of a "roso", too, who acts as a guide for the Oni, Shinto Deities, and delivers spoken messages to each house that gives the dancers an offering.

Katagami Style
An A-Un (mouth open, mouth shut) pair of Oni, Shinto Deities dance in turn. In some villages shishimai (the lion dance) is incorporated into the dance of the Oni, Shinto Deities. This is the most common style of Onidaiko in Sado. 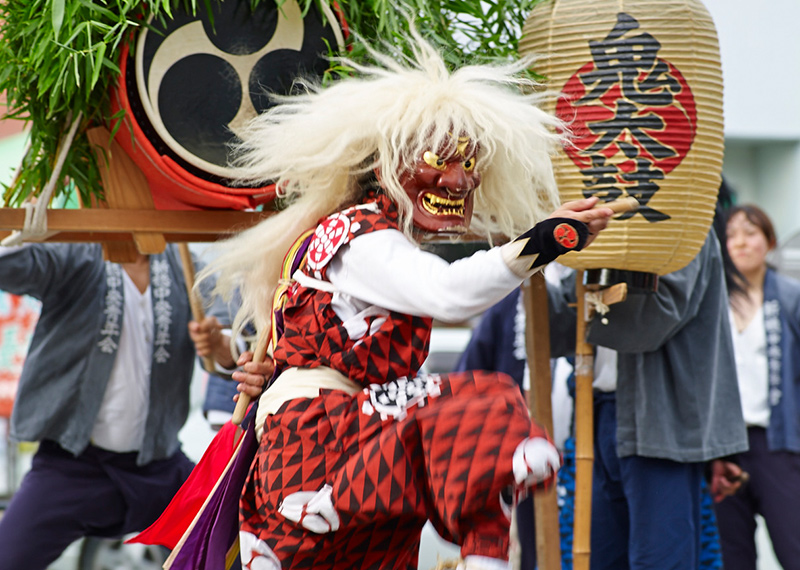 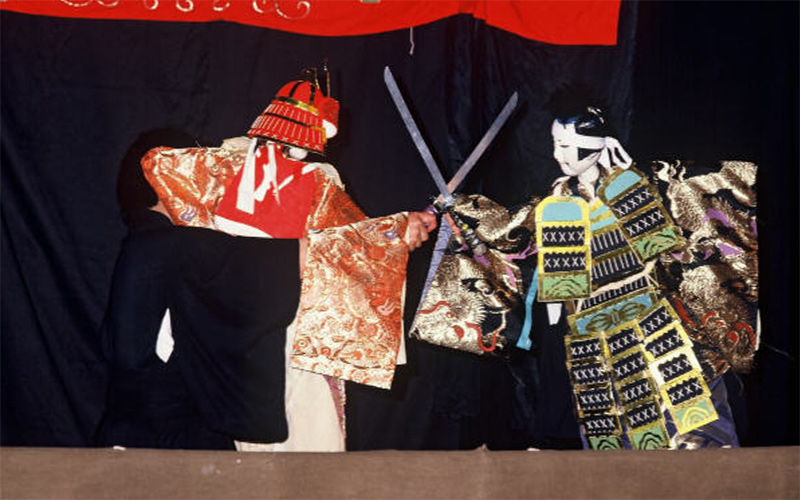 Astride a wooden horse's neck, a man dances and delivers messages of celebration accompanied by jiuta traditional music, while going from door to door. This is an essential traditional performing art at the New Year and other celebratory events. A unique black mask with distorted cheeks, used in Harigoma in the Aikawa area, is said to imitate the face of Tajima Mikata, who was the most active mining engineer at the Aikawa gold and silver mines during the early Edo Period (17th century). 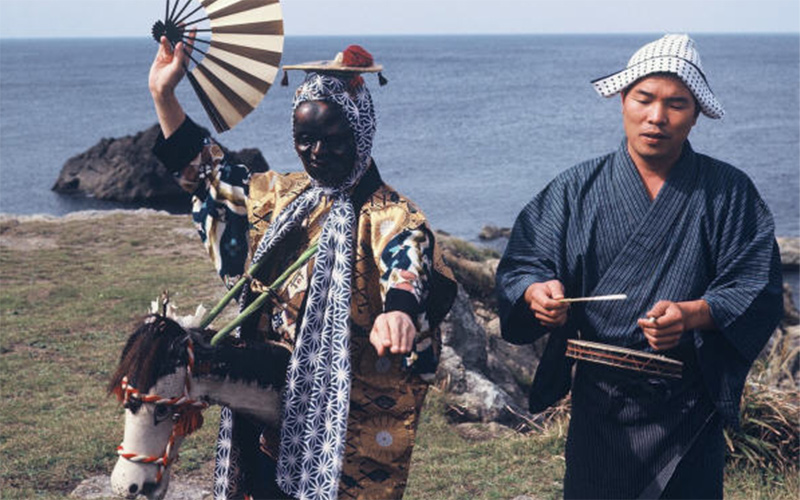 Tsuburosashi is one kind of Daikagura (a type of traditional dance performance using props) in Sado, and is designated as a Niigata Prefecture Intangible Folk Cultural Asset. It is dedicated to Sugawara Shrine, located in the Hamochi area, and entertainers go from door to door of the households near the shrine. "Onimai Tsuburosashi," "Daidai Kagura" and "Chitochinton," all from the Ogi area, fall into the same category as Tsuburosashi, kagura music and dance dedicated to Shinto gods. Tsuburo means "phallus," and sashi is a dialectic word for "sasuru" (to stroke). Tsuburosashi is a primitive folk art performance to pray for fertility and a good harvest. 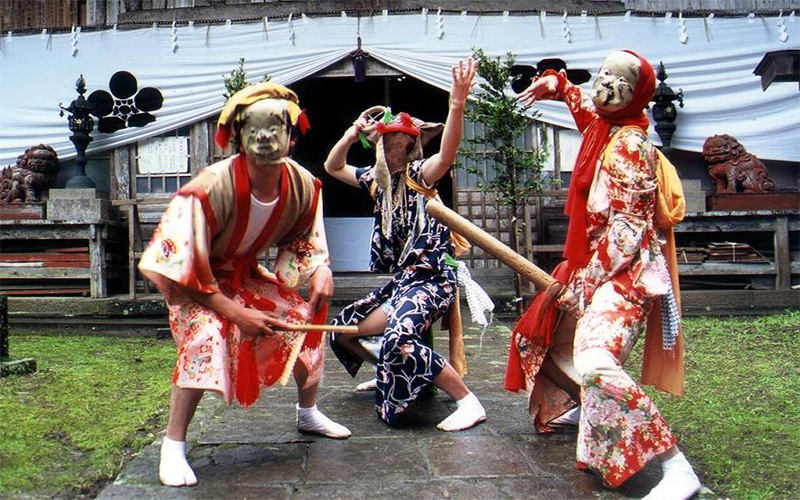 Designated a Niigata Prefecture Intangible Folk Cultural Asset, Hanagasa Odori is performed to pray for a rich harvest. The name is derived from the hats of its dancers, which are decorated with flowers in red, yellow, blue, purple and white. The dance is comprised of four dances: one is Ota odori to celebrate rice planting; another is Shinji (ritual) odori for a rich harvest; and the others are Chiyo odori and Kaneta odori to celebrate the harvest. In addition, dances of a lion and Oni, Shinto Deities are often added. This mid-September event, at Kuji Hajimangu Shrine in the Ryotsu area, is of a particularly large and elaborate scale. 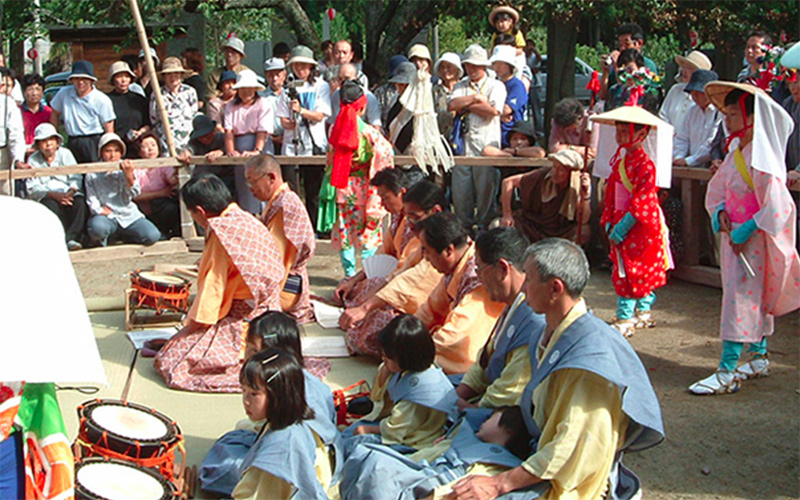 The origin of the dance is unknown, but Aikawa Ondo has the longest history among all others in Sado. The songs that accompany the bon-odori dance (a dance performed to honour ancestral spirits during the Bon festival) have numerous themes, ranging from love suicides to current affairs. Among them, Genpei Gundan, which depicts battles between the Genji clan and Heike clan during medieval times, and was sung in front of the Commissioner for Sado in the past, is still sung to this day. Aikawa Ondo is a masculine, yet elegant, dance with parts both dynamic and quiet. You can see the performed Aikawa Ondo at an event called "Yoi-no-Mai", held annually in the Aikawa area in early June. 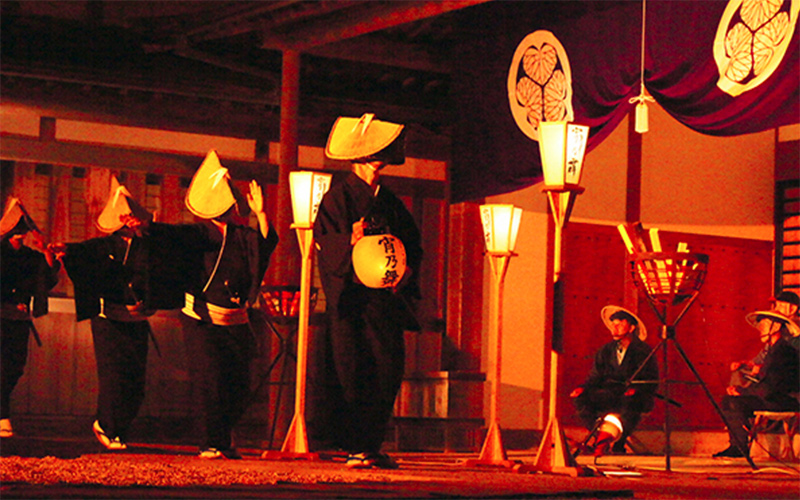 Ryotsu Jinku is a song sung to accompany the bon-odori dance. In terms of musicality, it is said to be even better than Okesa. However, the tune is unique and complicated, making it a folk song reputedly favoured by professionals. Little is known about the origin of the song, but it is one of the most popular folk songs in Sado.

Mumyoi is the name of the red clay containing iron oxide produced in the neighbourhood of Sado Kinzan Gold Mine. Mumyoiyaki-ware is a type of ceramic unique to Sado, made by mixing red clay with other types of clay and firing creations at a high temperature. It is extremely solid, and produces a clear, metallic sound when flicked with a finger. The more it's used, the more it glows. Mumyoiyaki ware ranges from household goods to artistic crafts. The pottery of Sekisui Ito, who is designated a Living National Treasure, is located in the Aikawa area, renowned as the home to Mumyoiyaki ware.

Casting is a technique of metalwork to produce dishes or artistic crafts by pouring molten metal into a hollow mould. If the original model is made from wax, the technique is called lost-wax casting. Moulds are made from clay, and in order to take out the finished metal object, the moulds are destroyed. As the mould cannot be reused, lost-wax casting is a very rare, precious traditional craft. The oldest example of this technique in Sado is said to be the rifling of a cannon barrel made by lost-wax casting, by order of the Commissioner for Sado, in the Edo Period (19th century). The bronze works cast, using the lost-wax casting process, by Shodo Sasaki (a Living National Treasure), can be seen in the waiting room at Sado Kisen's Niigata Ferry Terminal, and at Shodo Sasaki Museum attached to Sado Rekishi Densetsukan (Sado History Museum). 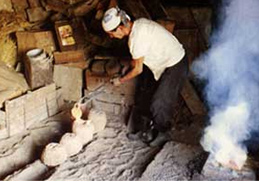 Saokiori is a recycled fabric. It is woven using cotton fibres or fibres taken from the bark of wisteria and Japanese lime as warp, and strips of old clothes or other textiles, as weft. Sakiori cloths are water resistant and so, they were often used for work clothes. The beautiful, multi-coloured appearance and soft texture of Sakiori have recently gained it attention, and the material is being transformed into artistic crafts, including gorgeous tapestries similar to paintings, and a large variety of folk crafts, including bags, tablecloths, accessories, and so on. 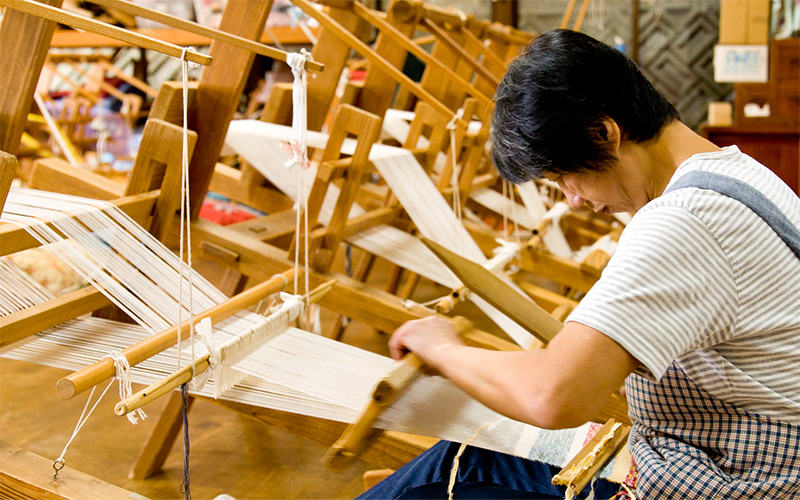 Sado is known as a great source of high-quality bamboo, and it is considered that more than twenty kinds of bamboo grow naturally here. Bamboo is crafted into small pieces like accessories, as well as dolls, and household goods such as baskets. They make great souvenirs! Not only folk crafts, but elaborate and dynamic creations by bamboo craft artists, have earned a high reputation both inside and outside Japan.